“What have I always believed?

That on the whole, and by and large, if a man lived properly, not according to what any priests said, but according to what seemed decent and honest inside, then it would, at the end, more or less, turn out all right.” ― Terry Pratchett

Small Gods is much like the earlier Pyramids, insofar as it doesn’t really fit into one of the core series’ within the Discworld. At a stretch they are sometimes classified in their own miniseries of Ancient Civilisations. This tale deals with the ideas of religion, belief and morality, and takes place in the empire of Omnia, ruled by the Great God Om. 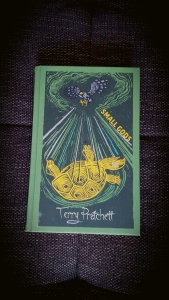 One of the key threads of the story is that of belief. More important any given god is only as strong as the strength of belief in him. The more believers has, the more powerful they become. Small Gods, aside from being the book title, also refers to what happens to gods with little or no believers – they become small, weak, drifting in the deserts.

This, being the central premise of the book, really caught my attention as an unashamed atheist: that a god can only exist if enough people believe in them. I love how Pratchett deals with religion in this story. That anything that disagrees with the given religion is heretical and must be destroyed. I also like the way religion is described, with its hierarchical structure, and the power wielded at the top. Small Gods shows the intense levels of cynicism that the author viewed the world with, implying the religious books are not the words of the god handed to the prophets, but created by the head of the order to suit their needs.

This book also throws in atheists and philosophers from neighbouring empires. One premise Pratchett brings up over the course of the book is that of the power of knowledge, and its role in religious war.

The main character, the massively devout Brother Brutha is a wonderful, very well crafted character. While lacking in intelligence, he has a mind like a sponge and an ability to retain almost anything he sees. He pledges unwavering fealty to the Great God Om, even when he is at his weakest, and Brutha learns things that completely change his worldview, and that of his religion. The God Om himself also features heavily as he tries to regain his strength, along the Deacon Vorbis, the villainous head of the Quisition – think the Spanish Inquisition, only maybe more like the Monty Python portrayal!

A very entertaining, funny, and thought-provoking read, Small Gods is one I rate highly within the series – I only find it a shame that both this and Pyramids are the only books of their kind within the Discworld series.