“The whole of life is just like watching a film. Only it’s as though you always get in ten minutes after the big picture has started, and no-one will tell you the plot, so you have to work it out all yourself from the clues.” – Terry Pratchett

“…inside every old person is a young person wondering what happened.” – Terry Pratchett

Cinema – a place where dreams are made, lived, sold and, quite often, destroyed. We all go to the cinema to be told a story, to escape reality and to explore exotic locales. In short, cinema allows us to live dreams in vivid, high definition and immersive content. As children we almost hope that if we believe in those Hollywood dreams hard enough, they may just come true. Some of us do as adults – I know I’d love to join the ragtag crew of the Millennium Falcon in a galaxy far, far away! For some Hollywood represents a different dream – the chance to make it big, to shoot for the stars and earn all the trappings of fame. 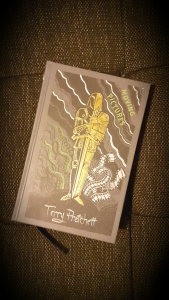 But what about on the Disc? Welcome to Holy Wood – a scrubby hill covered with a small stand of scraggly trees, in the middle of the sand dunes on the coast. It looks deserted, mainly because it is. Except for the sunken city, now home to the fish and lobsters. But as with the Hollywood we know and “love”, it calls out to those seeking fame, fortune, and the chance to make a fast buck.

For years people have packed up and headed out to Hollywood, California with a bunch of clothes, hopes and dreams, and very little else. The dream of becoming the next Marilyn Monroe or James Dean is a very attractive idea. Sadly, it is attractive to many, and only a few will strike it lucky and hit the big time.

Moving Pictures charts the journey of a brilliant, if lazy, young wizard – Victor Tugelbend. He works exceptionally hard at being average, doing just enough to stay enrolled at Unseen University, without having to graduate. Holy Wood calls to him, leading him to make the trip to the fast-growing world of cinema. Although this book sits within the Wizards miniseries, other than Victor, the majority of the wizards have relatively small roles. But this isn’t a criticism of this book – I actually quite like its loose connection to the miniseries while almost serving as a standalone book at the same time.

I like the way Terry Pratchett describes the early days of cinema, starting out with the discovery and creation of the Disc’s version of film – octo-cellulose. He adds to the mystique of film in having its creation attributed to the alchemists of Ankh-Morpork. Throughout the book, Pratchett charts the rise and rise of Holy Wood, in what imagine to be a parody of the growth of its Earthly twin city, with an added comic twist. Think amazing wonder-animals, in this case with the ability to speak; think dashing and brave heroes; think beautiful damsels in distress; think hideous monsters.

The other aspect of this tale that I really enjoy is that Pratchett hasn’t painted an entirely rosey, saccharine view of the Hollywood dream. There is a dark side to the fame and glory sought by the people who visit, where the dreams and greed take hold and the power of Holy Wood turns those dreams into nightmares. The way the birth of cinema is portrayed throughout is brilliantly fun, from its rise to the fall near the end. And any film nut will quickly spot many entertaining parodies of some of the classic films from the heyday of Hollywood.

With Moving Pictures, I felt Pratchett was cementing his vision for this series that had already had strong foundations laid in Guards! Guards! I think overall the latter was a more entertaining story in my own opinion, but this one certainly kicks on with his vision and paving the way for a great number of wonderful stories to come. 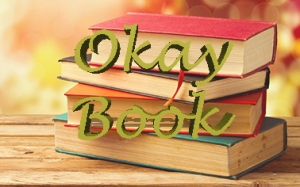