“Young man” he said, “understand this; there are two Londons. There’s London Above – that’s where you lived – and then there’s London Below – the Underside – inhabited by the people who fell through the cracks in the world. Now you’re one of them. Good night.” – Neil Gaiman

So I felt, as I sometimes do when reading longer book series, that I needed a change of pace from the Discworld. Not because I was bored of them, but because I felt like I needed to try something completely new. A little while back I had been on a mini shopping spree and came back with a few books, all ones I have heard recommended, but by authors I had not tried before. And one of those was a curiosity-piquing book called Neverwhere, by an English fellow named Neil Gaiman. I was already aware of Gaiman – although I haven’t read it yet, I have heard the radio play of Good Omens that he co-authored with Terry Pratchett – so when I heard there was also going to be a radio play of Neverwhere, I gave it a listen. It was good enough that it piqued my interest. 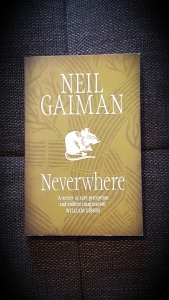 The version of this book that I was reading was a revised edition including element cut from earlier editions. Picking up the book in the shop, the blurb on the back hooked me. Granted, I already knew the story to some extent thanks to the radio play – but how often does the film/audio play do the real book justice? Though I seldom ever read the little dedications from other authors or literary critics on the back, the glowing reviews only heightened my interest in this book. So I parted with my cash and out I walked with the book in hand, eager to read it.

One of the rear cover dedications comes from Gaiman’s friend, Tori Amos, where she opens with “I didn’t ever want this book to end…”. Was this high praise, or slightly over-exuberant review from a friend? I would say it’s fully justified. This might just have become one of my favourite books.

But why? Well the characters are wonderful, well developed and strong. The rollercoaster of fortunes and feelings the characters experience was also felt by me. The narrative of the story is fantastic, and having visited London many a time myself, it really comes through that Gaiman has put in plenty of research to make this book. The story itself is fantastic – it is something different in the sci-fi/fantasy world, while leveraging a lot of real world crossover and referencing.

The main character is Richard Mayhew, a Scot who now lives and works in London, where he has a comfortable life with his high-flying fianceé Jessica. Until a chance encounter with a scared, injured girl by the name Door, changes the course of his life. Upon choosing to help the disheveled girl as opposed to ignoring her and heading to a dinner meeting, Jessica leaves Richard on the spot. Then strange things start happening. A couple of shady characters come looking for their “lost and vulnerable sister”, conveniently knowing where he lives. Then, he finds himself becoming almost invisible to the rest of the world, except for those poor souls that slip through the cracks of the world.

Over the next few days, Richard finds his life literally fading. It isn’t so much the case that people don’t recognise him, but that he is ceasing to have factored in the lives of those around him – almost as if his life is being erased. He still exists on a level only seen and inhabited by those who fall through the cracks in society. And so begins his journey into London Below. I won’t give too much more away on the plot – though some may feel maybe I have said too much already – as the story only gets better from here, in my opinion.
Neil Gaiman’s imagination and creativity turn this fantasy tale into something different. There are no typical fantasy tropes here – gone are the vampires, the witches and the dragons. Not that they are bad things in the fantasy genre, but it is so refreshing to see something a bit different. The research put in, including walking through the Victorian sewers of London, lend the work a real sense of authenticity. And for anyone familiar with London and some of its famous landmarks and tube stations – a whole range of these have been twisted to create colourful settings and characters in Gaiman’s London Below.

The story is strong, the characters fantastic, and I loved the locations. The whole concept could make for an interesting series, one that the author himself has almost hinted at as a minor possibility – of creating Below versions of big cities around the world. Given how much I loved this book, that is something I would really like to see.