Twenty winters have passed since the Cataclysm brought down society and robbed people of their memories. Humanity, vastly reduced in numbers since the initial chaos, has started anew in Canal City with the aid of library books and steam technology. The Scout and Ranger Corps was established to search for possible survivors and to replenish dwindling resources. Dev is the captain of the scout airship Smoke Sparrow, and Shay is the scholar of their newest expedition. Their destination is Innsmouth, Massachusetts, a small fishing town that is mentioned in obscure books but shows up on no maps. Might its secrets offer answers? But within the fog-covered, ruined hillside town by the bay lurk unspeakable dangers and horrors beyond imagining. The expedition team soon learns that Innsmouth is one town that should have been left forgotten. – Skyships Over Innsmouth

After my first NetGalley read, The Last Policeman by Ben H. Winters, I had high hopes for my next book. Sadly, it just wasn’t to be. Normally, as you’ll all know if you’ve read my previous reviews, I start with a quote from the book that I really like. This time round though, I couldn’t find a single quote I liked. There wasn’t much, if anything I liked this book. Instead, I opted to share the description for this book with you all. Go ahead, give it a good read over. Because this is important. Also, keep in mind that the book is listed as being horror, sci-fi and fantasy. And it’s also described as being steampunk.
Let’s start with that last point – steampunk. Really the only element of the book that I felt was steampunk where the almost too-obvious skyships. That’s about it. This disappointed me as it was one of the main draws of this book to me, as a fan of steampunk. But that’s okay though, as that’s not the core of the story. Described as a mix of sci-fi, horror and fantasy, a trio of genres I like, I was both looking forward to this book, and somewhat unnerved as to how the blend would work all at once. 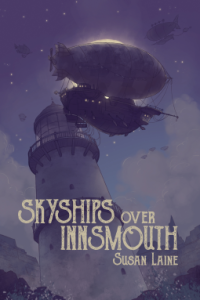 I am sorry to say, it didn’t really work. Fantasy is not a word I would personally use to describe Skyships Over Innsmouth. This is just my personal opinion, but fantasy for me conjures up images of witches, and wizards, dragons, dwarves, trolls, that kind of thing. Ok so there are some entities in this book that aren’t “of Earth” but I think they were intended to fit more into the horror bracket than that of fantasy. The horror element I also found wanting. I am a fan of horror, though I wouldn’t say it scares me as such (except for Stephen King’s IT – damn clowns!). But here, I just felt Laine was trying too hard. I picked up on many Poe and Lovecraftian undertones throughout. Since finishing the book, I have read other views where it seems other readers spotted this and perceived it to almost be trying to follow on from the works of these authors. This is never clearer than the emergence of a fearsome creature that speaks in its own alien tongue. This being is basically Lovecraft’s legendary Cthulhu.

The author seems to have a real love of cliche and metaphor. I have nothing wrong with the use of either of these devices as long as they are handled with a restrained hand. But Laine seems to have used as many as she could come up with. One that stuck with me was the line “silent as a tomb, it was”. As a phrase, there is nothing too much wrong with it, it just grated on me for some reason. Linguistically Laine repeats phrases or at least similar phrases to hammer home a point. She describes the “monsters” in this story as alternately “horrible alien creatures” or “abnormal alien creatures”.

All of this though, is not enough to make this such a terrible read for me. What really did it was the unexpected romance between the two male leads. This isn’t an issue as such, but just reread that blurb back at the start of this review – not one single reference to this. Yet this seems to be the true heart of this story. The first two paragraphs discuss at length how the leads both have a hidden love/lust for one another that they don’t realise is reciprocated. Then every other paragraph, or so it seems, continues to remind us of the growing feelings until the characters admit it. Then their romance grows, as does their lust. The final few paragraphs finally break the obvious sexual tension describing the two leads finally acting on their feelings. As I have already mentioned, this doesn’t bother me – there are plenty of books that cover this type of subject, but it was wholly unexpected based on the description. 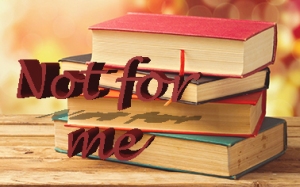 My Tweets
Join 1,277 other followers
Follow Books and Beyond Reviews on WordPress.com