So just a few short days after sharing my very first Guest Post from the fantastic A.K. Alliss, I have the great pleasure of bringing you my second post. Today, I would like to welcome back an author of four books, someone who is an old friend here at Books and Beyond having had two of his brilliant books reviewed here and having kindly sat down with me for an interview as well. I present to you author of The Apocalypse Mechanism and The Barataria Key – J.M. Richardson. Today, he presents us with a post on writing. Or more specifically writing a sequel soon after the launch of the prequel, and the work that goes in to a book whose main location is not one familiar to the author. 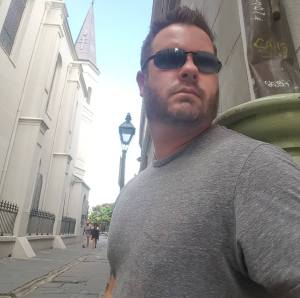 So I’m writing a new book. I almost forgot to. My newest novel, The Barataria Key, was released on December 21st, and as you might imagine, I was elated. It was my fourth full novel, and the second in its own series. That feeling never gets old—the excitement over a new release and the anticipation of how it will be received. Still, I hunger every day for new feedback, reviews, and the chance to talk about my stories with readers. Sometimes, however, you get to a point where you’re so caught up in promotion, social media, and in-person events that you have little time to actually write. At some point in the last couple of months, I realised that I’m going to need another instalment in this series. I forgot. That was a terrible feeling because I knew full well that this book was going to take at least a year to write, and once that manuscript is delivered to my publisher, so many other things have to happen. I have to wait for the contract, and then edits begin. That takes quite some time because there are other books in line for their own edits. This takes months. Then we get into the fine tuning. They’re editing, I’m editing, we’re approving each other’s changes, and we haven’t even begun to talk about cover art, cover reveals, proofing, galleys, and typesetting. Imagine my anxiety to realise that from that moment, a new James Beauregard novel would not make it to readers for at least a year and a half. So I set to writing.

I remember when I had only one book. It was easy to say, “Hey, read my book”. It was a fresh story. A reader didn’t need to know anything prior to it. There were new settings and characters, fresh from my imagination. But when I wrote the next book, a frightening thought occurred to me. How do I get people to read the second book if they didn’t read the first? That thought was terrifying. It seemed like my market had just shrunk from literally everyone (potentially) to the relative handful that had read the first story. So I had to look to other storytellers on how to make this work.

It’s pointless to ignore how much influence I take from Indiana Jones. Sometimes I hate to admit it. I know it’s not literature. I wish I could say I was molded in the pages of Hemingway or Tolstoy; something classy. But I loved Indy as a kid. It was fun, and it sparked my imagination. I found myself in another time and in another place. Even when I wasn’t watching, I obsessed about ancient civilizations and faraway lands. That’s when I started writing stories of my own. I always say that reading (and writing for me) allows you to travel for the price of a book. One thing the Indy movies taught me was that you could watch any one by itself and still have fun. You could start with the second or third, and go back to the first. It didn’t matter. It was perfectly clear that there was a common back story, and it surfaced in every new movie. The viewer is reminded of it in common, but subtle ways, and you still get to enjoy the new adventure. They were all loosely connected along the line; stand-alone but part of a chronological story line. That’s what I did with The Barataria Key as a continuance of the story from the original book, The Apocalypse Mechanism.

Each book can stand alone even as I hint at situations from the previous book. There is an underlying narrative that continues with some mainstay characters and background story. An example would be the loss of James Beauregard’s family. It was quite central to his character development in the first book, and so it had to be present in the second. It’s part of who he is. But if you didn’t read the first book, I had to drop that into the story through dialogue, both internal and external. It works, and if you read the first one after, then great. But it doesn’t take away from your experience to read them out of order.

I would say that to some degree, one of those commonalities that give each stand-alone book some voltage from release to release is setting. The city of New Orleans, Beauregard’s home, is a character in itself. The city bursts with trumpeting jazz riffs on some molasses-slow French Quarter street and fragrances of a gumbo roux someone is nurturing around the corner. But just as New Orleans is present in each book, James finds himself exploring the mysteries and forbidding shadows of human history. From ancient cults in The Apocalypse Mechanism to secret societies and Mayan mystique in The Barataria Key, he ends up in locales that lend a different set of flavours to the story.

I have always been a bit of an Anglophile. As a kid interested in history and anthropology, medieval England fascinated me, followed later by other eras of interest. I swoon over thoughts of how people lived in distant times and places. I obsess. I’m the type of person that could spend all day in a single museum or historic town just marveling over artifacts and buildings, trying to imagine life for those people way back then. I don’t know why England interested me so. Maybe it was the common language, despite the sprawling distance. Maybe it’s in my DNA. The ancestors of my namesake can be traced to early fifteenth century Hertfordshire, in the tiny town of Westmill. Nevertheless, I could not wait to visit, and last year I did for the first time.

My time in London was one of the greatest travelling experiences of my life. I made sure to experience all that I could, from visits to the British Museum to enjoying pies and pints at some of the most colourful pubs in the city. I hit the big attractions in Westminster and the Tower. But I was sure to duck into the alleys, and hunt down nearly forgotten sections of the old city wall. I visited the location of William Wallace’s execution. I viewed the historic books and documents in the British Library. I have officially fallen in love with the city. As I sat to begin the next chapter in James Beauregard’s adventures, I needed him to be far from New Orleans, as the last book hit far too close to home. What better place to carry on his story than in London?

It helps me to set a book in a place that I’ve visited. I’m from the New Orleans area, I’ve been to Galveston, Texas many times, and I’ve seen the Mayan World, so these were natural places for me to set The Barataria Key. I do write about places I’ve never visited, but that’s where research comes in. I want the historical references and locations to be factual, at least in foundation. I always imagine that I’ll look like a fool if I get it wrong. There will always be that person who pulls up Google while reading my books, and I want to be prepared for that. But I also research because I personally want to know. I want to know as much as I possibly can about anything and everything that piques my interest. For years, I dreamed of visiting London. I read full histories of the city, how it’s laid out, how it grew, and who influenced it. I wanted to know the neighbourhoods, especially as I was about to travel there. I wanted to know the Bayswater area in which I would stay. I studied the Underground maps and how to get around. I sought out maps and researched little-known churches and museums. I wanted to drink where Dickens did. I wanted to see an altar where Richard II prayed and a chamber once occupied by Edward I. I walked the streets. I conversed with the people. I took in the culture.

This next book will be a testament to my love affair with London, its history, and its people. James will not have as leisurely of a time there as I did. I only hope that I can do it justice. Either way, at the end, I’ll raise a glass and toast this fine city. I’ll clink a pint glass with Beauregard and enjoy the renewed adventure inspired by yet another amazing city. Cheers.