London is a city on wheels – a future city like you’ve never known before. In the terrible aftermath of the Sixty Minute War, cities which survived the apocalypse became predators, chasing and feeding on smaller towns. Now London is hunting down its prey, getting ready to feed. But as the chase begins, Tom uncovers a secret – a secret full of deadly consequences. Soon he is plunged into a world of unkillable enemies, threatened by a weapon that will tear his life apart…

I purchased a copy of this book for my personal reading.

I purchased the full series of these books some time ago and with the release of the film of the same title now seemed the most opportune moment to give it a read. Mortal Engines offers up a blend of steampunk set within a post apocalyptic future vision of Earth. In a world destroyed by war, resources became limited and coveted by all. Many of the settlements, towns and cities became mobile – roving the scarred wastes in search of much needed materials. The largest settlements prey upon anything smaller, harvesting them while smaller towns feast on any scraps left behind. 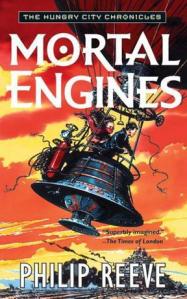 I was hooked early on. Reeve’s descriptive style captivated me, really immersing me in the story. The “good guys” are relatable and likeable, riddled with character flaws and failings even though they mean well. The villains of the series are utterly loathsome – from the deluded Mayor Crome, the self-loving Thaddeus Valentine to the part-machine assassin Shrike. The characters have been created so well I found myself loving and loathing them as their arcs unfold.

The plot is well defined, and the world building throughout is excellent. The details really bring to life a ravaged world filled with scavengers, hunters and people desperate to survive in peace. Twists appear throughout the story and are used to good effect without ever feeling like they are there just because. Character motivations ebb and flow and reveal themselves at just the right time and where relevant to the storyline.

Mortal Engines ticked all the boxes from the first page to the last. I loved the world and locations so vividly brought to life – a vibrant, dangerous futuristic world of survival and power. It sated my need for a well-written steampunk novel without overplaying its hand. I am looking forward to seeing how the story develops in the three books that follow Mortal Engines.