Buried in a woodland grave are a mother and her child. One is alive. One is dead.

DC ‘Charlie’ Stafford is assigned by her boss, DI Geoffrey Hunter to assist with the missing persons investigation.

As more pairs go missing, the pressure mounts. Leads are going cold. Suspects are identified but have they got the right person?

Can Charlie stop the sadistic killer whose only wish is to punish those he deems to have committed a wrong. Or will she herself unwittingly become a victim.A gripping, heart-stopping crime thriller, introducing new series character DC Charlotte ‘Charlie’ Stafford of London Metropolitan Police.

The opportunity to join the blog tour for a crime thriller was one I wasn’t going to pass up. The concept intrigued me. Clearly DC Stafford has a twisted killer on her hands, abducting mothers with the child perceived to be the favourite. The police face a race against time as more and more pairs are snatched without a trace. Suspects start to mount and the team at the Metropolitan Police have their work cut out for them to find the culprit before time runs out for their victims. 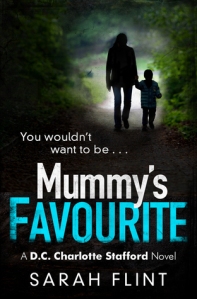 Mummy’s Favourite is a high-speed run filled with twists and turns from start to finish. Sarah Flint does a fantastic job of portraying her lead characters, and even the supporting cast have personalities that shine through. The sense of urgency and drive to crack the case runs through every single decision that she makes.

Alongside an ever growing roster of victims, DC Stafford and her team have an increasing list of suspects. From abusive husbands, to spurned lovers, to obsessive ex-clients, all fit the bill as a potential for the crime, but without the final piece of evidence the police struggle to put the culprit behind bars. A stroke of luck offers a lead at the most timely moment as a fellow officer and her son go missing. With the case drawing to a close, the identity of the offender rocks the team to its core, but explains how this vicious killer has managed to keep a step ahead of the police at all times.

The book moves along at a frenetic pace and had me wanting to read just one more chapter. The drive to capture the assailant infused an urgency and energy throughout the book, driving it forward to the explosive conclusion. The only element that was a touch cliche for my liking was a side crime that Charlie Stafford finds herself working on. At the conclusion of the central proceedings, she conveniently manages to wrap up this other crime through what appeared to be dumb luck. Thankfully however, it did not detract from what is a fantastic read.

One thought on “Mummy’s Favourite by Sarah Flint”