Best friends they may be, but Molly and Kate are very different individuals. Molly, a spoilt child and then an indulged wife, not only gets whatever she wants, she takes things that don’t belong to her, including other women’s husbands. Kate, fiercely loyal, has, until now, always defended and protected her friend, at the same time offering refuge to Molly’s traumatised son. Against her better judgement, Kate is forced to revisit the deaths of two men; men who had affairs with Molly. Considered tragic and accidental at the time, fresh scrutiny and new revelations trigger a disturbing chain of events that have sickening consequences.

Molly either can’t or won’t mend her ways, and Kate, caught up in her own personal tragedy, is forced to draw a line in the sand. Their friendship is at breaking point; Molly has gone too far this time. All is not as it seems.

I received a free copy of this book courtesy of the author.

The Blame Game is a rollercoaster of a read, and something I was really able to sink my teeth into. Filled with menace, treachery, lies, deceit and a heaped serving of threat. It was a pacy book with so many twists and turns it had me gripped from cover to cover. The story plays out against a backdrop of adultery, broken marriages, death, grief and obsession. Molly is vilified in the small town in which she lives, having had two affairs, one with a married man. The apparent suicide of the married father of one only compounds her problems. The other man died in a car accident. 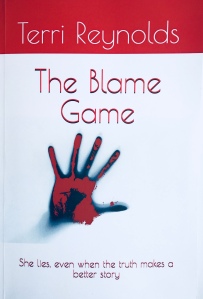 As her marriage broke down, things worsened with verbal and physical violence in front of their young son, Seth. As the years rolled by, Seth became a troubled individual suffering from the trauma of what he has seen and heard over the years. He becomes estranged from both of his parents. Molly, having filed for divorce from her husband James, suffers torment and game playing from him, making the process as painful as possible. The widow of the man she was seeing has turned large parts of the community against her.

Things spiralled as Molly suffers more and more at the hands of the scorned widow and her estranged husband. Though no matter what happens some habits are harder to kick. Her friends, few in number though they may be, seek answers to what is going on and reflecting on the seemingly tragic deaths of her two lovers. Can there be a killer involved? Is Molly responsible? Or the estranged husband? The scorned widow? The traumatised child? Or were these events really just a series of tragic events.

Terri Reynolds presents a cast of credible suspects throughout the book. Any one of them could be the culprit, and I found as the story progressed that I was continually see-sawing from one to the other, never totally sure as to who was the true culprit. Not until, quite literally, the last line of the book. The narrative was fast paced, moving from one element to the next keeping me guessing, and wanting to unravel the next part that might help me uncover the truth. The Blame Game is an impressive read from start to finish.

2 thoughts on “The Blame Game by Terri Reynolds”